On the first day of my American Culture class I asked everyone to take out a piece of paper and either draw a picture of American culture or describe it in a word or two. I wanted the students to share the first thing that popped into their heads. Almost half the class said–you guessed it–the name of the most recognized fast food restaurant in the world.

McDonald’s is the world’s #1 fast-food company by sales, with more than 33,000 restaurants in 119 countries. Brothers Dick and Mac McDonald who ran a very efficient burger restaurant in San Bernardino, California had no idea that their single burger joint would go on to become a McDonald’s franchise empire under entrepreneur Ray Kroc. 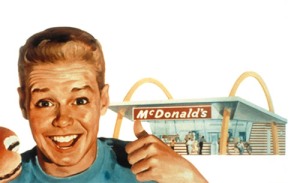