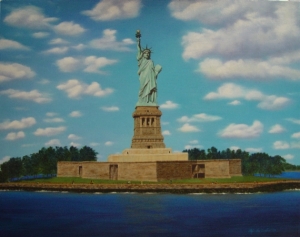 In the spirit of America’s Independence week, I present to you this citizenship test.  Write down these ten questions from the U.S. citizenship test and answer them before you click on the answers.

In order to become a naturalized U.S. citizen, a person must correctly answer six of 10 randomly selected questions. Can you pass the test?

1. What are the colors of our flag?

2. How many stripes are there in the flag?

3. What country did we fight during the Revolutionary War?

4. What are the three branches of our government?

5. Can you name the original thirteen states?

7. Who wrote “The Star-Spangled Banner?”

8. Who signs bills into law?

9. What are the first 10 amendments to the Constitution called?

10. In what month do we vote for the president?

How did you do?

If you didn’t do that well, you are not alone.  It seems many Americans are not too aware of our history, much less our current government leaders.  Consider this quote:

However, the names of some of our current leaders slipped the minds of a few, for example, the leader of the executive branch (President Barack Obama) and his second-in-command (Vice President Joe Biden) seemed even harder for some.

Question: Why do I still love America?