Last week I watched a documentary film from 2009 that profiles Anna Wintour and the American edition of Vogue magazine as it prepares for its annual most important fall fashion issue.  It’s called The September Issue and I highly recommend it if you are at all curious about the British-born editor-in-chief Wintour, who nevertheless remains an enigmatic figure behind those enormous sunglasses.  (The only person I have strong positive feelings for in the documentary is creative director Grace Coddington, without whom Anna Wintour would have her goose cooked.)  The Hollywood version of the diva-in-chief is The Devil Wears Prada (2006) starring Meryl Streep as the Wintour character and Anne Hathaway as her assistant.  (The 2003 book on which the film is based was written by Wintour’s former assistant Lauren Weisberger.)

Asma al-Assad is glamorous, young, and very chic—the freshest and most magnetic of first ladies. Her style is not the couture-and-bling dazzle of Middle Eastern power but a deliberate lack of adornment. She’s a rare combination: a thin, long-limbed beauty with a trained analytic mind who dresses with cunning understatement. Paris Match calls her “the element of light in a country full of shadow zones.” She is the first lady of Syria.

Syria is known as the safest country in the Middle East, possibly because, as the State Department’s Web site says, “the Syrian government conducts intense physical and electronic surveillance of both Syrian citizens and foreign visitors.” It’s a secular country where women earn as much as men and the Muslim veil is forbidden in universities, a place without bombings, unrest, or kidnappings, but its shadow zones are deep and dark.

You can see from the article that the profile avoids the horrific human rights record of the Assad regime.  After the Syrian uprisings began in spring 2011, Vogue pulled the article from its online archive but you can read the original here.  (The Internet always allows such things to show up again somewhere.)  It has been reported that the global PR firm Brown Lloyd James arranged for this positive propaganda piece to help soften the image of the Assad family in the Western media.  The United Nations estimates that up to 11,000 Syrians have been killed in the uprisings, primarily civilian protesters but also armed combatants fighting the Syrian army.

Take this as a lesson in bad timing and fashion-backward reporting. 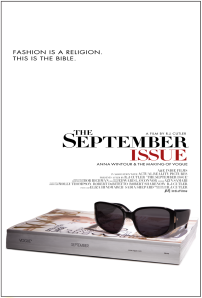